28C and 10k…. Shouldn’t be an issue for someone running the MdS.

Well, that’s if they stick to the plan and stay injury free.

I arrived at The Hurst in Tadley with sub-45min in mind. That would be 7:15 splits. ‘Should be fine’ I thought, it then started to warm up and I began to contemplate whether I should really push for that (with a niggle in my calf) or whether I should just trot around and enjoy it. Anyway, as the start arrived and we assembled at the starting line I could hear people chatting about the first half being mainly down hill and how they don’t usually make a negative split at Tadley, as the first half is so much easier. Hmmm… Maybe I could bank a couple of 7minute miles and then cruise the last half! Oh, there’s the klaxon- GO! And I off I shot!

What a stupid idea- I went off at 6:45 pace, caught up in the excitement of the start and enjoying (as the guy described it) a forgiving down hill start to the 10k. I eventually settled into a nice 6:45-6:50 rhythm for the first 5k. Maybe this could be achievable, maybe I could get way under the 45min target! And then BOOM- I blew up, my legs went dead, concentration was shot an I couldn’t run at a good pace. 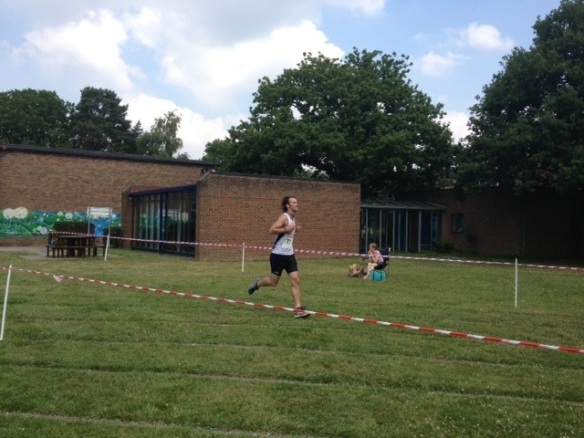 For the last 2miles it was about hanging on, plodding 8minute miles whilst the world and it’s mother started pouring past me! A number of v60 runners, a guy pushing his toddler in a pram and (annoyingly!) lots of people running 45min 10ks who had paced themselves correctly!

Lesson 1: stick to your game plan
Lesson 2: what works for the guy at the start line does not work for me
Lesson 3: it’s hard work running in the heat
Lesson 4: consistency is the key
Lesson 5: don’t run a 10k on the hottest day of the year an try to run a PB

All of these are key to success in the desert! I just need to remember them, not be tempted to copy others and not stray away from my game plan!

3weeks until the Lakeland 50! I hope it cools down before then… either way, I’ll definitely be sticking to the game plan!