Good morning. It’s 6am on Sunday 6th October. Yet another early start.

With precisely 6 months to go until I am on the start line of the 2014 MdS, it’s fair to say I’m a little nervous. I’m questioning my trainers, filling out entry forms & waivers, confirming my blood type, double checking my bag choice, submitting for medicals, buying some serious insurance, worrying about my average weekly mileage, ordering different electrolytes to try out…. Let’s just say the last brand dint agree with me. The list goes on…. the preparation is no small task, but it’s enthralling!

Meanwhile, in about 4 hours’ time I’ll be on the start line of the 2013 Clarendon Marathon. Not quite the challenge of the MdS, but another significant day of training. A warm day is forecast and the route is described as having rolling hills – a perfect days training. I cannot wait. I’m aiming for anything under 4h30min, but will most probably set off for a 4:00-4:15 pace, to see how my legs cope. No point taking it too easy! Right, see you on the other side! 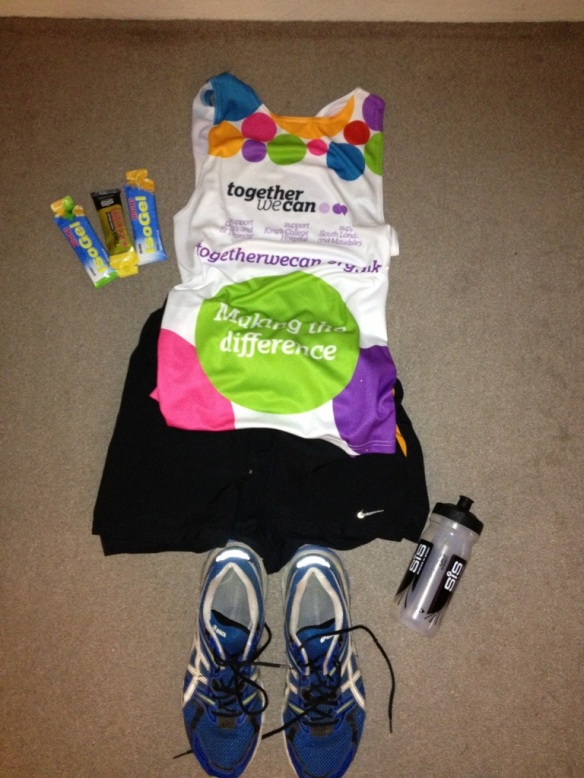 Well, let’s just say they were more than “rolling hills”! And, the weather was warmer than “warm”!

I went off at what I thought was a steady pace, but was trying to do my pacing calculations on the fly as my GPs couldn’t find a signal. So, with that excuse out of the way…. I clocked 1hr 53min for the first half and a disastrous 2hr 31min for the second half. I know, I didn’t heed my own warning from a previous race about pacing…. but I did get a good beasting! I didn’t drink a great deal in the first half as I was too busy rushing through the aid stations and the second half had some decent hills! Nothing compared to the 10Peaks, but more than I was expecting and didn’t have anything in the bank.
Result : 4hr 24mins. A great workout after week which already consisted of 20+miles running, 1 hr spinning and 1 hr of circuits.

All in, it was great days racing and a course that I will definitely come back to! The organisation was great, the marshals were friendly and the route challenging but enjoyable.

Next weekend a relaxing few days in Devon (with a run or two), then its Birmingham Half Marathon!