The plan was to use the Country to Capital as a dry run for the long stage of the the big race. Trainers. Pack. Pace. Clothing. Nutrition. Hydration. I would be simulating the MdS long day as close as possible.. well, minus the heat!

Pack: Invo8 race pac with 6.2 kg of dead weight (importantly I packed it with stuff I want/need to keep, so I couldn’t wimp out and ditch some weight!)

As always, pre-race nerves dictate that I prepare everything in detail the night before. I packed and repacked, weighed and re-weighed, drank and drank some more. All set! I even got my breakfast out the night before: I decided to try the Expedition Foods asian noodles. At a whopping 800kcal per portion, this will be one of my evening meals in the desert. 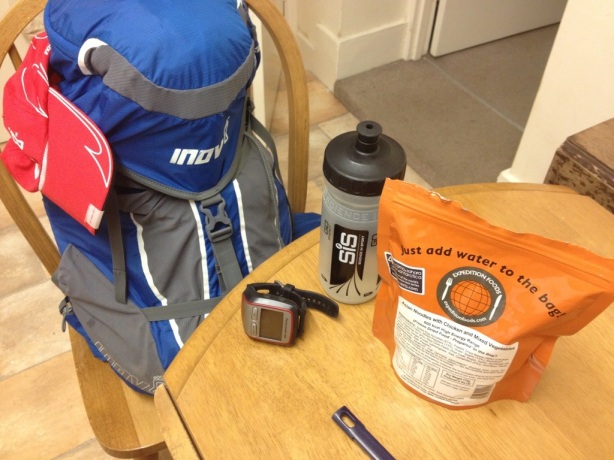 All set the night before!

Another early alarm and I was on the road at 5:30 AM. A quick stop at the station to pick up a fellow MdSer, Andy Massey gave me chance to scoff some rehydrated chicken and freeze dried noodles – actually pretty tasty and no “ill effects” during the run ;).
The race started with a mad dash down the street in Wendover… it caught me by surprise as I was still fiddling with my laces as the hooter went! I soon discovered why there was such urgency amongst some runners- the first mile or two was peppered with gates and stiles. Not to worry – the plan was slow and steady. So I stuck to the plan and kept knocking out 10-10:30 minute miles… with a 6kg back pack that would be tough going after 45 miles. The human traffic helped steady the pace and temper my usual early race excitement. What didn’t help was a lack of signal on my Garmin – I started out frustrated as I couldn’t work out my pace on the go. I soon realised this was good MdS prep – I’ll be sporting my £9.99 casio in the desert!

The journey to the first checkpoint was pretty eventful, a few groups getting lost and plenty of ankle deep mud! Great terrain, stunning views and plenty of hard work to condition the legs! 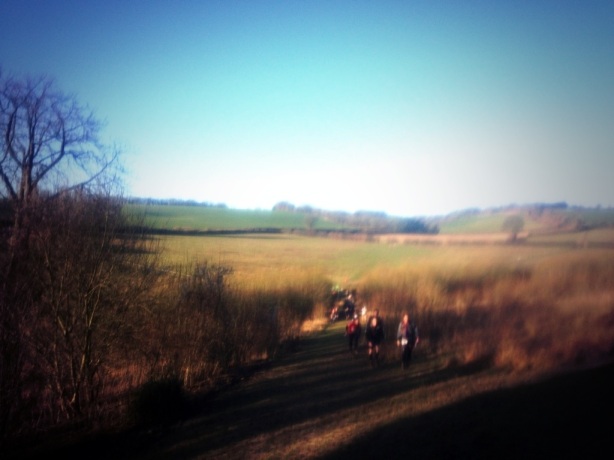 Perfect running conditions from the ankle up

The next 10 miles are a complete blur, I got into a nice rhythm and have no real recollection of the route. I seemed to find that sweet spot of maintaining a good pace and not really caring about the miles. Before I knew it, I was thundering into checkpoint 2. I say thundering… it wasn’t fast, I just was running ahead of pace for the last mile :). Everyone appeared to be quite relaxed and there was no sense of urgency, the front runners had been and gone so the mid-packers were happily scoffing fruit cake, jelly babies and Gu gels. Meanwhile, I topped up my water, nibbled some nuts and a quick bite of peperami. Delicious! 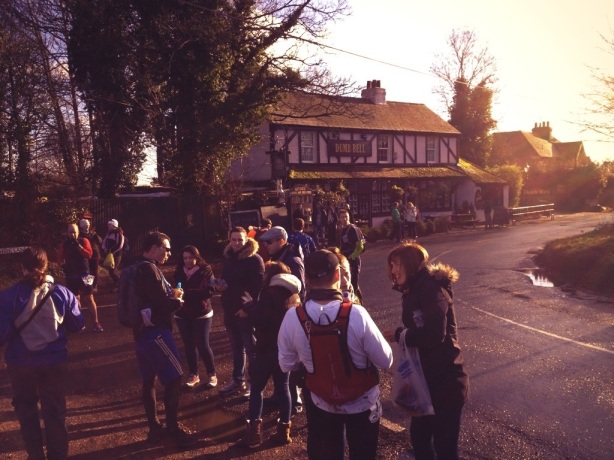 Some rather casual looking Ultra Runners.

With water restocked and a handful of snacks inhaled, I set off from this CP with a brisk walk- giving the food chance to settle. Having spent the last few miles chatting to random folk, I set off alone… slightly anti social, but it was nice to take in the views and have a bit of time listening to some music (loving the shuffle – thanks Lucy!). The music really helped drag me from CP2 to CP3 and onto CP4. Those two legs were the hardest mentally… I crossed the M25 shortly after CP2 but still had the  best part of a marathon to run! Denham, Cowley, Uxbridge, Southall…. and so on…all the way to Little Venice! 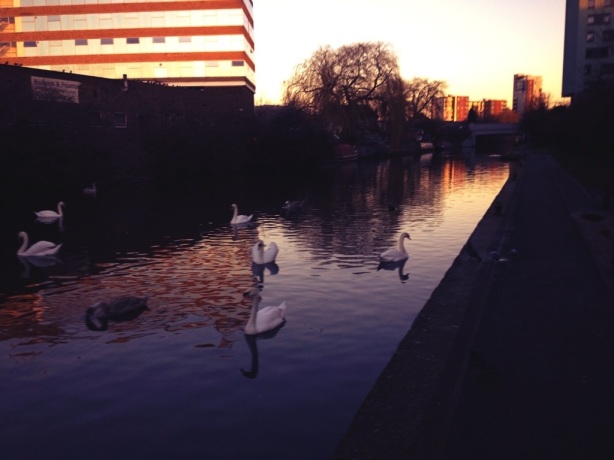 I was now following the canal form CP3 to CP4, passing a few people here and there. Others passing me. The miles were ticking away nicely!  At the time it seemed like the repetitive nature of running 20 odd miles along the canal would be good prep for the repetitive nature of running through sand dunes in the desert – I know the desert will be physically more demanding… but it was pretty demoralising to see bridge after bridge, barge after barge and many fisherman relaxing by the water side! I think I have the wrong hobby! The Grand Union Canal. Having been there once, I feel I have seen enough of it to last me a life time… well perhaps a enough to last me until next year :).

By this stage my pace was dropping and I was alternating run/walk over the final stages into CP4. A gel, some sports beans and a chew on some peperami soon fixed the energy levels. Note: perperami tastes strange when your mouth is dry and you’ve just had an energy gel-  but it did my energy levels loads of good! CP4 finally arrived and I was on the final straight. just a  a half marathon run run. “Just”!

Unbelievably, as I set off from CP4 I felt the best I had all day. My feet were in good nick, hydration/energy levels were good and I was still self sufficient with my stash of snacks. The dash from CP4 to CP5 was much shorter than anticipated – I’m not sure it was the full 10k they had originally planned. Either I was close to the finish than I thought or 5 to 6 was a long one!

I had hoped to be home and dry by the time the sun had set to avoid the mandatory head torch… but it was getting dull and the marshals kindly asked me to wear my head torch and pair up with the next runner. I was buddied up with Emily for the final 6 miles. It was great to have some company again – some well qualified company at that. Emily was telling me about her iron man training in 2013. A very welcome distraction – we were trotting along at what felt to be 10:30min/miles for the first few miles. I had to put in a walk – she had the stamina to keep going. Determined not to fall behind and lose sight – I gulped down my final gel and shot blok- and picked up the pace. I clawed back the gap and overtook her and couple of others with about a mile to go. However, I couldn’t keep the pace going- they overtook me with about 300m to go along with another guy who I had been targeting since CP5. A final 200m dash with lots of cheers from other racers/finishers and some bemused embers of the public and I was all done in 8hr34mins. 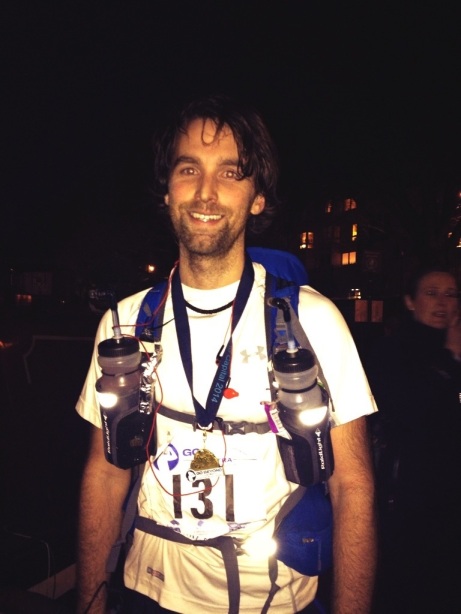 On finishing, I felt in pretty good shape. I could have run some more if I needed to, not that I wanted to! No blisters and no cramps – couldn’t be happier with that!

Actually, happy is an understatement, the only “injury” I picked up was where the mud from the early morning trail section had dried around the top of my socks and then rubbed  and grazed my ankle for the next 6 hours. Yes, I could have run that race a lot faster, but that wasn’t what I set out to do. All in all, it went exactly as planned.

A quick cuppa doped up with sugar and I was off to the train station…. the journey home was the most tedious part of the whole day!

All in all a great race.  Definitely an ultra I’d like to do again – maybe next time i’ll go without the pack and try and post a good time!!